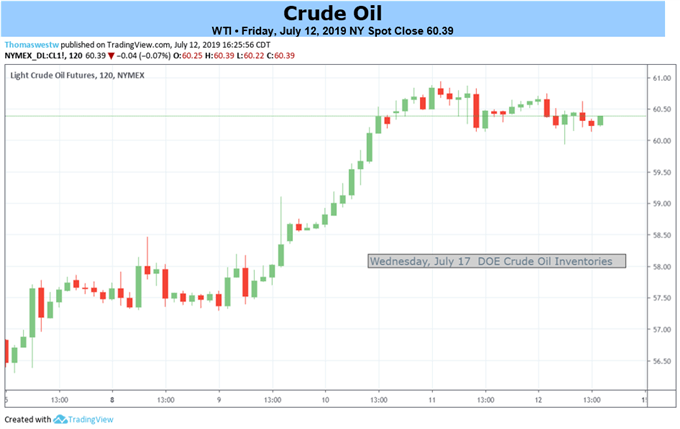 See our free guide to learn how to use economic news in your trading strategy!

Crude oil prices may oscillate between political risks emanating from Iran and fears about the current trajectory for global growth. The latter will likely overwhelm gains made in Brent over politically-induced supply disruption fears and will ultimately make the cycle-sensitive commodity succumb to selling pressure and extends its decline.

Political tension between Iran and the US has been alarmingly high in recent months after oil tankers in the Gulf of Oman were attacked shortly before the Revolutionary Guard shot down a US drone. Diplomatic relations may further sour after news broke that Tehran had violated its uranium enrichment levels. An aggressive response from Washington could be expected which may be a boon for crude oil prices.

Be sure to follow me on Twitter @ZabelinDimitri to stay up to date on political risks affecting markets!

Early next week, EU foreign ministers will be convening in Brussels to discuss Iran’s deviation from complying with the 2015 Join Comprehensive Plan of Action (the Obama-era denuclearization deal abandoned by the Trump administration). European officials have been attempting to preserve the accord by providing economic aid to Iran in the form of a Special Purpose Vehicle that allows non-US Dollar denominated trade with Iran to alleviate the impact of US sanctions. 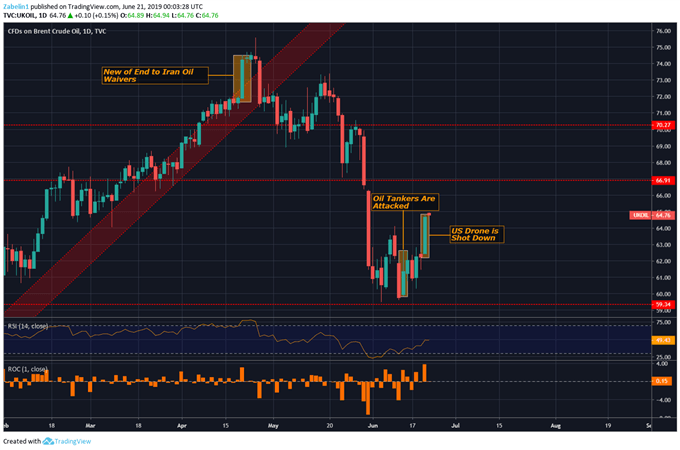 As the second-largest economy and consumer of crude oil, China’s publication of second-quarter GDP data will warrant traders’ attention. Despite the US-China trade truce at last month’s G20 summit, the Asian economy is struggling to grow against the backdrop of unfavorable external demand. If the report underwhelms, it will likely send a chilling message to global financial markets and may pressure crude oil prices.

Stockpiles are expected to continue to climb despite the sharp drop reported in last week’s EIA data, with OPEC forecasting that there will be a surplus in 2020 as US shale production continues to surge. Weakening global demand combined with overproduction and a supply glut leave little room for upward movement despite political risks in the Gulf states. It is likely that the latter will be overwhelmed by the former and Brent will continue to suffer, in the coming week and into the third quarter.