The Canadian employment report showed a sizeable drop of 71.2k, significantly worse against an expected 10k increase. The fall in employment had also been distributed evenly between both full-time workers (-38.4k) and part-time workers (-32.8k). Elsewhere, the unemployment rate surprised on the upside, gaining 0.4ppts to 5.9%, despite the fact that the participation rate saw a slight dip. The wage component had also missed expectations rising 4.4%, against an expected 4.5%. Overall, this is a weak data point, which has naturally seen the Canadian Dollar come under notable selling pressure. While BoC’s Lane recently stated that they had not been considering an insurance rate cut, this will likely provide some concerns for the central bank and thus will remain data dependent when considering its next move. 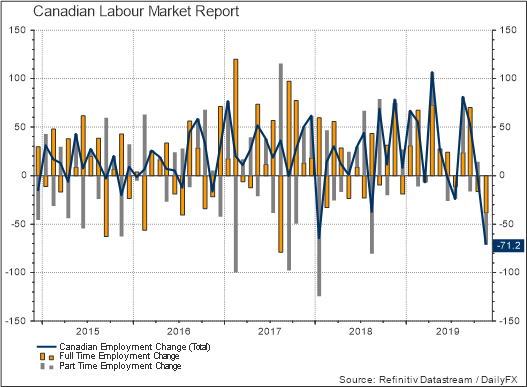 In reaction to the weak labour market report, the Canadian Dollar fell sharply against the US Dollar, resulting in USD/CAD rising to session highs of 1.3250. While money markets are less than 60% priced for a BoC rate cut in 2020, continued signs of weakness in the Canadian economy is likely to force the central bank into an insurance cut. 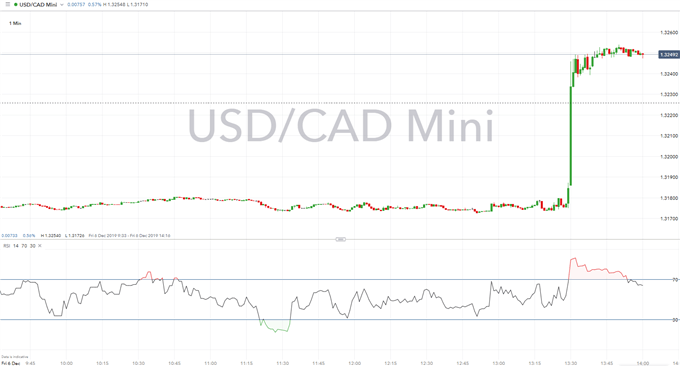 DailyFX provides forex news and technical analysis on the trends that influence the global currency markets.